How is it possible this consecrated man has come to a conclusion the problem is the revelation of Truth by Holy Spirit?

‘Catholics must learn new ways in which they can win young hearts,’ says Diarmuid Martin

The problem isn't the Truth, it was, and remains, the starvation and depravity of It.


Irish Catholicism today is “foreign” to young people and needs to wake up to the situation, according to Archbishop of Dublin Diarmuid Martin.

“Change is painful; there is, however, no alternative,” he said. “Irish religious culture is changing.

The main body of the membership of Irish Catholicism and its leadership belong to an age and cultural group that is in many ways foreign to the culture of young people. The Irish church needs to waken itself to the urgency of this situation,” he said.

“This will not be easy. There is uncertainty about how to proceed,” he added, noting that there would be “a sort of passive resistance”.

The problems we see now are the effects of mortal sin upon the intellect.     Archbishop Martin's statement does not leave a listener edified about the origin of his theological and intellectual chaos.

I can't believe his allegation that something new has developed since the time of Christ would have any credibility with anyone in a State of Sanctifying Grace.

The answers is teaching the beauty and attraction of Truth, which leads people to the absolution of sin and the properties of Divinity that cures people of their diabolical disorientation.  Without fail.

St. John Paul II had no problem attracting youth to the Truth. 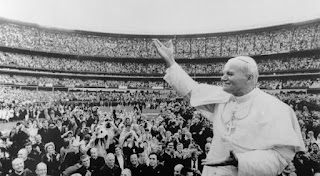 "Nothing under the sun is new, neither is any man able to say: Behold this is new: for it hath already gone before in the ages that were before us."